After spending a few weeks looking at the visitor vs resident notions it became clear today why it’s such a big deal.  During a unconference today in Halifax a group of teachers were discussing and exploring Project Based Learning. Specifically one of the participants had been looking at the Buck Institute’s resources and for implementing PBL. I told them as a kind of “fun fact” that I knew the latest consultant and that she happened to be from Canada. While that fact was mildly interesting I realized what would be more significant would be a more formal introduction. I messaged Shelley who happened to be online and she agreed to an impromptu session with this group. Within minutes she was sharing with them her own story and some advice for beginners. While the day was filled with lots of resource and idea sharing, the most impactful moment was sharing and  finding new people. 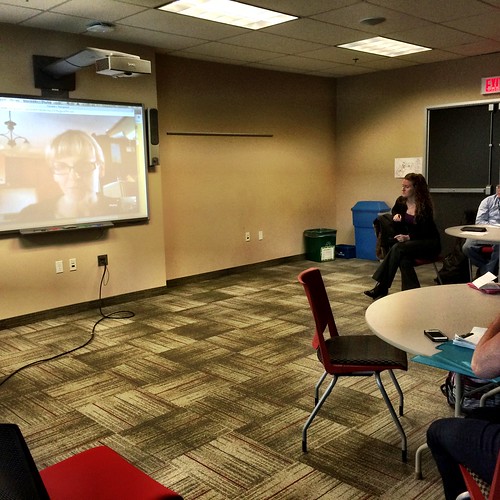 Darren actually is fairly well known as a great presenter, storyteller, Math teacher and inventor of the Scribe Post. But lately he’s been doing something that’s inspired me in a few different ways and you may not be familiar with what he’s been up to. After many discussions around the challenge of blogging, Darren has been playing with an app called Social Cam and has been using it to offer daily or almost daily reflections of his learning called “While Walking”. Not only are these often provocative ideas that has enabled him to practice active reflection but it’s helped make him stronger connections in his local community. I’ve used this tool now a few times and have plans to incorporate it into our … Read the rest

Digital dualism is the belief that the on and offline are largely separate and distinct realities. Digital dualists view digital content as part of a "virtual" world separate from a "real" world found in physical space.

I had a great day yesterday at Dakota Collegiate in Winnipeg. This is a school that is in their 3rd year of a BYOD initiative and for the most part, they are making some wonderful headway. My observations and conversations with them suggest they are really trying to be thoughtful in their implementation. Like any large school, some are more comfortable and trying to push the envelope and others are in need of time to explore more and yet others still are questioning the value of the technology as a connecting device.

I had the opportunity to speak with the entire staff in small groups throughout the day. Our conversations were very interesting. We discussed a range of topics from asessement, attention, pedagogy and more. Yet for many they still were very concerned and uncertain about this idea of connection. Their concerns mirror how many educators view online connections.

While Dan Meyer is almost young enough to be my kid, he's been around these parts for a while and has provided a boat load of people with quality ideas and content. I rarely go through a presentation where I don't mention him at some point. This snippet from a conversation I had with Dan a couple years back always gets people thinking about the economics of sharing:

Searching through my blog here are the posts the mention Dan.

Today I was preparing for a short talk I'll be giving at the ISTE Leadership Symposium and had to include another nugget from Dan:

I don't have much more to add but just to say thanks Dan, if we ever cross paths in a physical space, I owe you a drink.

P.S. I wouldn't hurt me to say thanks to more people more often.  … Read the rest