Gotcha. I have no idea what educators should tweet about. Consider the title pure link bait. (Was thinking about titling it “I tweeted this out and you’ll never guess what happened next”, but that’s more of an Upworthy thing)

Actually there are many people who have created helpful guidelines and tools for educators delving into social media. I’m the last person you probably would look for to advise folks on how to use twitter. Having been using it for over 8 years and almost 100,000 tweets I’m still unsure and hesitate on sharing with people who to use it. The ways are varied and nuanced.

But I can share some of the ways I’ve used it, so here’s my unofficial guide to using twitter.

Often as I’m listening to music, a lyric will strike me and posting it offers a little puzzle piece and for those that see it as such, builds this tiny connection of getting an inside joke.

2. Get people to do challenges at live events.

@willrich45 I’ll buy either of you a drink if you can take another photo wearing the hat of the guy behind him.

@Shareski you owe me a beer.

Keeping with the music theme, a few times a year when I’m usually at home on the couch watching my wife and daughters watch the Bachelor, I’ll post some edited mp3s of songs and ask people to #namethattune. Warning: As an indication of my musical tastes, I thought “Wonder Wall” was a new song. My daughters shake their heads and roll their eyes.

I’ve prepared 15 clips from the 60’s to today’s top hits. Get your listening skills ready for #namethattune. Artist and song title required — Dean Shareski (@shareski) May 31, 2015

This rarely works. However this one time in Salt Lake City someone indeed brought a sandwich. 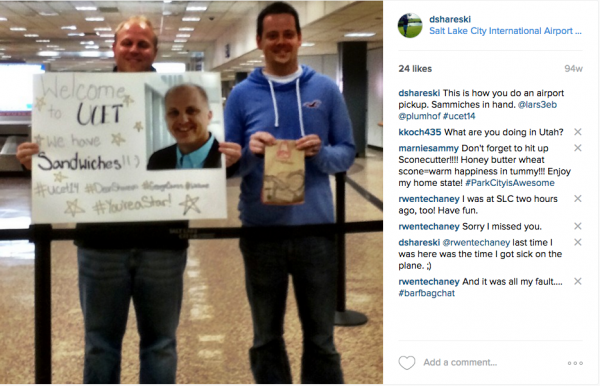 I have no idea if I did or not but will often suggest I invited that hashtag. It’s no #edchat but still. In addition, people will share corroborating research to support your habits.

Not sure why, but this pic made me think of @shareski #napchat pic.twitter.com/whbBgLx0hn — Tom Whitford (@twhitford) February 27, 2015

Either I talked my attendees to sleep, or they’re honoring @shareski‘s birthday with a group #napchat. You decide. pic.twitter.com/bDGR3WC88g — Steve Dembo (@teach42) March 17, 2014

7. Find people’s phones and take random photos with them.

At ISTE 2015, after my presentation, someone handed me a phone someone left. Suddenly I was now in charge of finding the owner. After taking a photo and  tweeting it out I located the owner.

@jscheffer I have this persons phone. Do you know whose it is? pic.twitter.com/DRHYH9X9ZI

Because we couldn’t work out a suitable meeting time until the next day, I decided to have some fun and take photos of me with interesting people. When I gave it back to the owner, he put together a little video of some of the images.

8. Besides sandwiches, you can ask people to bring you food at conferences.

Trying to move a huge desk to the garage. Currently it’s stuck in the hallway. Waiting for reinforcements or a geometry expert.

@thekyleguy we might. Waiting for my wife to get home to assess things. What’s your window of availability?

10. Tell someone when someone else says good things about them.

You can also say good things about someone but if you’re in a meeting, conference session or pub and someone you know that isn’t present is getting a shout out, let them know. Sometimes it will make them feel like a million bucks. And it took no effort. Occasionally you’ll do this on the day they’re getting married.

@shareski Thanks for telling me! Makes me feel like a million bucks! That and also that I am getting married today!!!

After a few updates and edits, I made it to 10. Now you can share this as an official list because 10 makes it so.

I don’t expect anyone to turn this into an infographic and hang on their staffroom walls. But, if these bits of goofiness mean anything, they are actually my round about way of building community. I’m sure for many this is of no help at all. Good thing there are all those other sites to help teach people the proper way to tweet.  Maybe in another 8 years I’ll get better.

I’m a fan of the humans. There are a gazillion ways to use Twitter. Use it however you like. I’ve chosen it, as well as most spaces online, to make connections with other humans.