If you don’t already know, I’m one of the Couroski brothers. I have socks to prove it. 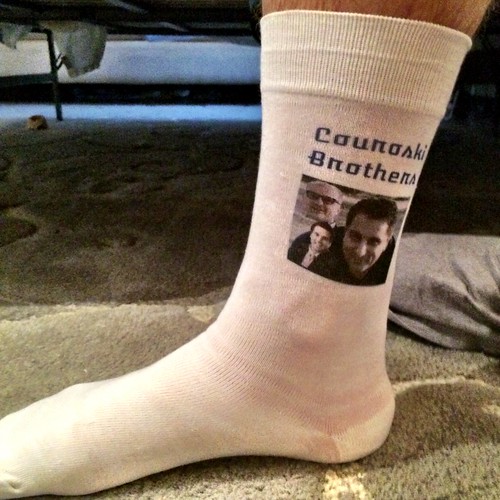 Alec and George have been a big part of my learning for several years. Alec got me started teaching at the University and we’ve presented together many times virtually and in person. When Alec turned 40, I organized a little video with 75 of his friends to have some fun and celebrate his life.

Over the last couple of years, George has been asking for his video.

I should have really made him one but between my laziness and lack of inspiration, it never happened. Fortunately, I have women in my life who remind me of stuff. Michelle Baldwin let me know that we missed George’s 40th last year and that perhaps some of us should step up. Michelle did her part and showcased her formidable musical talents with this.

So she challenged a few of us to do a little more than the obligatory Twitter or Facebook post. Sometimes I just need to be pushed to get stuff done so I took Michelle’s lead and played with the lyrics, downloaded a backtrack, edited it some and then took the brave leap to sing a little tribute to George.

If you aren’t up to listening to me, here are the lyrics.

You travel ’round the world and love to watch your sports
You’ve seen the SuperBowl and many NBA courts
You’ll wear jersey to support the local team
Then post an Instagram, I’m sure sometimes scream
But when you dress so casually I hope you will agree,
You need to rethink wearing your manpris.

You’re a big deal in the world of edtech
And yet your first tweet was “Where Are you Alec?”
You think that anyone can be a leader
You’ve made us all a bunch Beliebers
But I’m not worried that you’ll think that you are all the rage
Cause If you do you’ll answer to Paige.

So though your birthday came and we gave you jack squat
A great present isn’t something that is bought
We sent messages and wished some good luck
And yet it seems like we all kinda suck
But know that we are teasing you and sometimes we pretend
Yet we are always proud to call you friend.

In all seriousness, George has become an integral part of my learning and more importantly, a friend. Maybe next year, he’ll get his video. Either way, the soup counts!