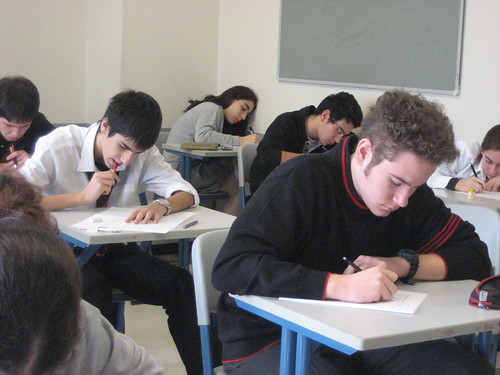 The PISA results were released this month and my overwhelming response was: Who cares? Many of my fellow Canadians were quite happy to be ranked sixth in the world. What does that even mean? Is that cause for celebration? Should we be upset? What would we do if we were first? (Hint: I’ve talked to many educators from schools with high test scores. They are the most resistant to try new things and be innovative for fear it will lower their test scores). Once again, these tests perpetuate the idea that:

There are no questions on the test that measure creativity (if that can even or should be measured), collaboration, or media literacy, never mind their ability to learn or their understanding of their body. The other thing it doesn’t measure is whether or not students like school. I’d like to know where Canada ranks on that scale. As a parent, I value that. I’ve been around schools enough to know that there’s lots of learning that happens, even in our so-called “worse” schools and classrooms. Sure, there are some teachers and schools better than others, but I also believe that students that are happy and enjoy school actually learn more. But of course, we don’t consider that important data. I’ll bet some people would consider it fluff. Instead we get the usual discourse from non-educators about how education sucks and the curriculum has to be revamped. Diane Ratvich recently debated a high ranking U.S. official about the obsession with testing and he challenged her with the the oft heard claim:

And because those things are hard to measure, many think they aren’t all that important. That’s really sad. Some openly dismiss those values as pie in the sky or “nice but not necessary” for learning. Few dare to openly state that, but I found one who wasn’t. I wrote about Michelle Rhee over 2 years ago when she made the following statement to Time Magazine:

People say, ‘Well, you know, test scores don’t take into account creativity and the love of learning,'” she says with a drippy, grating voice, lowering her eyelids halfway. Then she snaps back to herself. “I’m like, ‘You know what? I don’t give a crap.’ Don’t get me wrong. Creativity is good and whatever. But if the children don’t know how to read, I don’t care how creative you are. You’re not doing your job.”

This presumes you can’t do both. I think we can. I would argue that as educators we’re obligated to do both. But until we begin to design assessments that actually give credence to the love for learning, creativity and other so-called 21st century skills, I’m not going to “give a crap” about any of these tests.