I often ask people what they believe about learning. I suggest many people view learning and schools synonymously which while they aren’t, I think many schools inadvertently send a message that  learning is like Buckley’s cough syrup: “It tastes awful but it works.” Learning isn’t supposed to be easy. Or is it?

As I explore the way we characterize learning I continually see how much we value words like: “hard, challenging, rigor, and difficult” In my efforts to make school more engaging and joyful, these ideas, while maybe not opposing, are certainly seen in a hierarchy. Think of all the teachers, particularly high school and higher ed teachers who take pride in knowing how hard their course is. The classic statement: “Look to your left and look to your right, only one of you will pass this course” shows learning as elitist and rooted in ranking and grades. Knowing they have challenged students is the goal. “If everyone gets an A, how hard can it be?” Learning is supposed to be hard. Or is it?

Frank Smith reminds me how much school has impacted what we believe about learning. 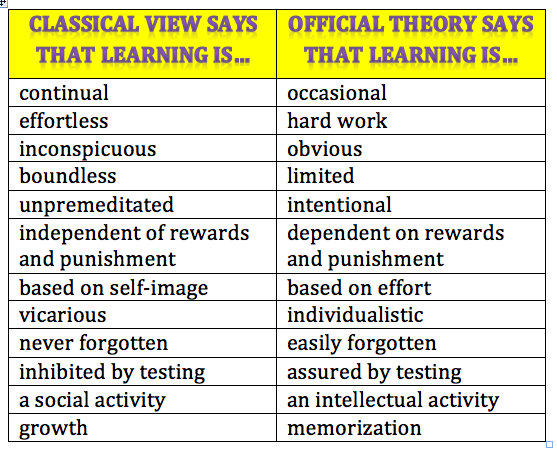 “Effortless” vs “hard work.” In his book, Smith describes the way children read and have learned so many things naturally, before the advent of formal schooling and suggests these were not usually hard. It’s very difficult to remove ourselves from our current context and appreciate that perhaps we may be wrong. This chart and indeed his book is a powerful conversation starter.

It seems if something isn’t hard, we don’t value it as much. It’s a large reason why the Arts and PE are seen as “fluffy” and less important than Algebra and Chemistry. I would argue the reason they are hard is partly related to the fact they aren’t very engaging for most students.  We have a clear hierarchy of subjects and spend most of our time and money focusing on the “hard stuff.” If we’re forced to choose between seriousness and challenging versus easy and fun, we’ll pick the former every time. Should we? It’s this kind of thinking that can contribute to schools that are void of joy. It’s what I fight against. I’m not convinced harder is better and I’m not convinced important and meaningful learning must be accompanied by rigor or challenge. I do think sometimes it is hard but that by its very nature does not make it better. “Raising the bar” and “increasing achievement” are terms I question. Not because I think they are wrong but because they send a certain connotation that promotes the idea that we’d rather you be miserable and doing hard tasks than enjoying this that we might not be able to measure.

As someone who sees themselves as a curious learner, I don’t think learning needs to be hard to be valuable. Again, the challenge of that statement is most of us are so ingrained in seeing learning and school as synonymous, we can’t separate them. If we shared examples of what people have learned to do online in the last decade, “hard/challenging” would not be the word that characterizes most of that. This is  because what people learn online is mostly their choice. Some skills and concepts are harder to learn than others and usually, the difficulty is related to expectations and time. It’s hard to be a good guitar player if you only play occasionally. While part of this conversation is semantics I also think part of it is about culture. A culture that sets up learning as “rigorous” and “challenging” as its primary characteristics sends a particular message. I’m just not sure it’s the one I want.

We must play. But our merriment must be of that kind (and it is, in fact, the merriest kind) which exists between people who have, from the outset, taken each other seriously