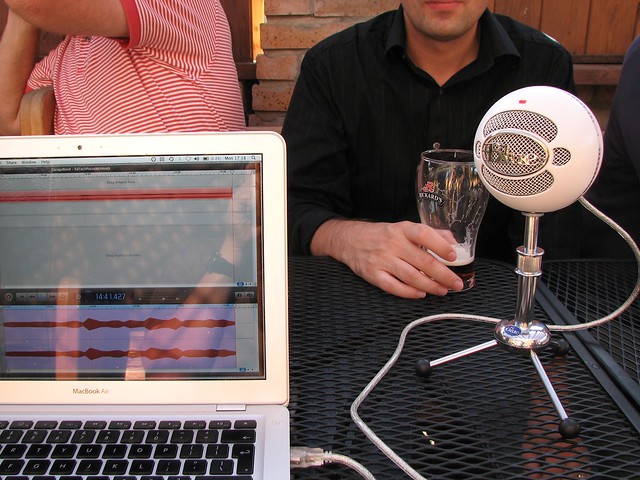 Yesterday  I mused on twitter about how people made their first connection online.

Reminiscing about how I first made connections with certain people forces me to think about how and why we find people a part of our lives. I'm not talking about loose ties here but more about people that you consider an integral part of your learning community. Friends perhaps, but certainly your teachers. When I do this it's amazing how many of these folks first came to me because I heard their voice. Not voice in the literary sense but their actual vocal chords producing their unique sound.

Podcasting as  subscribeable audio content has only been around since about 2004. It was the early educational podcasts that really helped me connect with certain individuals.

Steve Dembo aka Teach42. Steve began podcasting out of his car back in 2005 when I first came across his work. I wish I knew how I found him but my guess is I was searching for education and podcast and found his stuff. This is the first one I think I ever listened to. The fact he was in his car and recording audio to post online later was in itself intriguing in 2005. Steve's relaxed style made you feel like you were riding shot gun. Immediately I was interested and engaged.

Bud Hunt aka budtheteacher. Bud, like Steve did his podcasts in his car. He still does occasionally but not nearly enough. I remember him as a high school English teacher talking his students to the local bookstore to buy books. (Sorry Bud, I searched your blog for the podcast link but couldn't find it. Would you be so kind as to put it in the comments? I won't update this so folks are forced to read the comments. Sneaky, but hopefully effective)

Bud, like Steve made me feel welcome to join them. It wasn't really a dialoge but an opportunity to have a conversation. I know I left comments on their blogs and their responses let me know I was welcome to learn with them. We've been learning together for almost 7 years now.

One of my favorite podcasts of which I think there were only 2 episodes was EdTEch Coast to Coast. Actually it appears there are up to 17 but I think only two with the likes of Tim Lauer, Will Richardson, Tim Wilson and Steve Burt. 4 guys sitting around talking about something I was passionate about and learning about was gold for me. Since that time they've become some of my greatest teachers and indeed friends. It started with me hearing their voices.

I also remember the first time I heard of Chris Lehmann. It was in a podcast by David Warlick who really did a great job in the middle part of the previous decade in interviewing and exposing many to  a wide variety of folks. At the time Chris was an assistant principal in a school in New York City, shortly before his move to SLA.

There were others too that I felt a connection with because I heard their voice. Video was a bit of a challenge at the time because of bandwidth and encoding challenges. This was pre Youtube. Andy Carvin was exploring the viog but audio was much more doable.

There was something about the raw, unedited way in which these voices came to me. Full of "umms" and a little fumbling, I felt they were real people. Post production was minimal. I was attracted to blogs because I felt like I was reading people like me. Not professional broadcasters or writers but people with real things to say and offered an authenticity I only could find in face to face encounters. Recently Grant Potter and I discussed why ds106radio is so popular. It's for many reasons but one is that we hear people as they are. Pretenses are put aside and magically it's just people talking. Connections are made, friendships are possible.

I've been podcasting myself since 2005. (In this episode you'll hear me talk about podcasting in general and also the voices of Chris, Bud,Steve and David) Originally it was largely about proof of concept. Could I record audio and put it on the web for people to subscribe? Seems silly now but back then it was a little involved. Shortly after that I began podcasting with some Saskatchewan folks as we called ourselves the EdTech Posse. We might be the longest running educational group podcast on the planet. Whatever that means.

So this is partly reminiscing, partly reflection, partly lamenting but possibly encouraging people to re-discover or discover for the first time the power of your voice. I remember first learning about digital storytelling and one of the ideas that was shared many times was the power of your voice. Speaking remains our most basic and earliest form of communication. It's been around a lot longer than writing and offers something unique that the written word cannot convey. My itunes account is sorely lacking with educators just talking about learning. Maybe you can add to that playlist. I'd love to hear your voice. Keep writing if that's what you do, writing is great but your voice is really special. For me it creates another level of connection. Try it and let me know how it goes.