Once again, it almost didn’t happen. Not only have I been less diligent in my photo a day effort but realizing this year’s photo has been dominated by my new love made me thing it would be too boring. Then my wife reminded me how boring other years have been with golf and conference images.

If you doubt how boring those other years were check out the previous 10.

After reading Alan’s annual post I was reminded that it’s not about a streak but a meaningful method to document life. It works for me. I will say the challenge was much greater in the first 4-5 years before mobile phones. Using a camera was sometimes awkward as well as it was far less automated in terms of uploading. Back then, my focus was to be mindful of my world and try to capture things some may find . While I still try and practice that, it certainly has become harder after 10s of thousands of photos later. Travelling lots makes this easier. This year was all about Harriet and I have … Read the rest

This year was going to be my 10th year of doing an annual video of my year in photos but it almost didn’t happen. In May I had an issue with my external hard drive and my normal routine of saving and uploading photos was in jeopardy.  Like losing your Fitbit and deciding exercise is futile, I was less diligent about my photo a day effort.

I still did take photos but missed way more days than I ever had. So as the year was ending I thought it might be the year I put my yearly video to rest. Our New Year’s Day tradition includes having my family endure the 20-minute video of my year after which I’m teased about the number of golf and conference photos and generally the boringness of it all. And yet when I announced a few weeks ago that I wouldn’t do it, those same kids told me I had to.

Once again, more golf photos than you’d like, lots of sunsets and dog photos. But as October came, all that changed with the birth of Harriet Marigold Hynes. Our granddaughter is now the dominant subject of all photos and videos. While I … Read the rest

Well-being is a critical movement led by the province of Ontario that is essentially a response to the ever-increasing mental health issues of our students. While this is a complex issue with many factors, the one factor that we do control is the messages we send to students. Again this is tricky. On the one hand, it is our duty and privilege to empower students. We want them to realize their potential and see things that may not even know exists. We want them to feel as if they can change the(ir) world. On the other hand, this message often turns into a high-pressure environment where unreachable, unattainable goals and achievements have students consumed with stress.  So how do we provide both messages?

How do we empower students but at the same time protect and build their mental health?

I think a missing conversation is about contentment. Contentment is defined as being satisfied and not wanting more. The idea of being content can be seen as anti-innovation. Contentment is not very inspirational. It doesn’t do well on in a pretty image quotation. For some, it’s almost a downer or even a step backwards. Innovation is the buzzword of the … Read the rest

My original message was to encourage and create a culture where teachers look to share their ideas, thoughts, lessons, resources … Read the rest 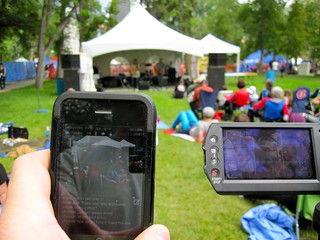