In a world where information and ideas are everywhere, I’m fascinated when people have a healthy obsession with something and go into great detail to analyze and deconstruct a topic or idea.

Sometimes it’s the topic itself but more often than not, it’s the person’s enthusiasm for the most minute details that keeps me interested.

As a sports fan, you may be familiar with the term “inside baseball” a broad term now used to refer to any behind the scenes insights or knowledge. Speaking of baseball, love him or hate him, I love listening to someone like Pete Rose talk about hitting. As arguably the greatest hitter in baseball, his breakdown of his craft is fascinating.

Sports analysts can often be annoying and yet can add new insights into their game. Here’s an example of two “experts” debating one of the most over analyzed topics in golf: Tiger Woods’ golf swing.

Unless you’re a golf fan, you didn’t watch that but what fascinates me is the detail and the passion they display as they argue this very unimportant topic. It reminds me of some of most memorable moments as a kid when we used to argue over the most inane things. Anyone on the outside would call these debates ridiculous and while on some level this is true, it’s hard to argue the knowledge and passion that flames these discussions.

I’m also a big fan of comedy and love the way Jerry Seinfeld breaks down his craft. This is such a great analysis of what makes a joke funny. English teachers should use this in a writing lesson.

Any lengthy interview he gives, he’ll always get into the inner workings of comedy and how to make people laugh.

I also love music documentaries where they talk about how a song comes to be. Here’s a wonderful break down of the Fleetwood Mac hit, “Go Your Own Way” and the way in which the opening guitar riff was developed.

There’s no one that geeks out more on Math than Dan Meyer. This is an example of someone who takes something that most may not find that interesting and someone pulls you in. Read his two posts on bottle flipping as a Math lesson. First, he questions whether it’s even a good lesson. Then after some comments, he reverses his opinion.  Even if you don’t really care about the math, it’s fun to see the detail and energy he expends creating a video and debating the merits and usefulness of this idea. Which leads me to the title and educational portion of this post. 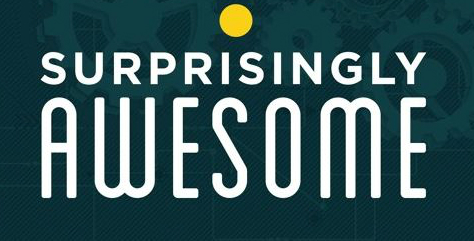 Surprisingly Awesome is a podcast that looks at things that are typically seen as boring or at least not particularly interesting and works to convince the audience that perhaps it is kind of awesome. Topics like mattresses and flossing, for example, are things that I would now say I find, not perhaps awesome, but more interesting than I did before.

Very few would argue that everything we teach and learn in school is awesome. Yes, the current narrative of change is focusing on making school more relevant but I also hear many suggest that some things are still necessary and yet are admittedly kind of boring. Dan Meyer’s TEDx talk is based on the premise that teaching Math is often a boring but necessary subject. Dan’s passion has been to make Math surprisingly awesome.

So my question to you is, what do you teach that you think is surprisingly awesome? Forget your maker spaces, robotics, and green screen activities, I’m talking about those topics that at first kids groan about but after you take them deep into it using whatever skills and passions you have, they come out the other end with a deeper appreciation and understanding. The comments here are fertile ground for us to create our educational version of Suprisingly Awesome.