So I think information and ideas can fall inside this quadrant I created. 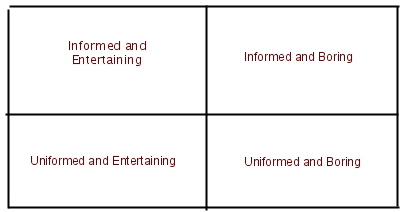 Obviously we should be aiming for the top left but I’m guessing the bottom left has more influence that the top right. (Think Fox News, or most of what you find on Youtube and the internet in general, and also see Andrew Keen). It once again falls into the long line of topics relegated to the “it is what it is” category.

I think being entertaining often gets a bad rap. We often see it a less academic or somehow a dumbing down of important and serious thought. Entertainment does not have to be synonymous with fluff. On one hand we try and make learning more engaging for our students and at the same time guard against the pointless drivel of the much of today’s content. Surely this will be an ongoing struggle.

I’m advocating for entertaining, or at least interesting (I haven’t decided yet if these are the same). I heard Gar Reynolds once say that 90% of Presentation slides are boring but surely 90% of people aren’t. And yet I sometimes get the same feeling as I read blogs. It has nothing to do with length either. Tell me stories, be funny, be clever, surprise me, anger me, or challenge me. I don’t have a recipe for how to do this but certainly if you’re a boring person in real life, I’m not sure you can pull off being entertaining online. I don’t know that many truly boring people. Mostly because I likely tend to consciously or subconsciously avoid them. Don’t we all?

In Dan Pink’s A Whole New Mind he advocates for people to be watching/listening to comedy everyday. I remember as a young child staying up late, hoping my parents didn’t noticed me so could watch the Tonight Show with Johnny Carson. My two favourite parts were Johnny’s monologue and whenever he had a stand up comedian. I’ve always been intrigued with how comedians are able to craft language and physical gestures to make people laugh. I won’t even tell you how many Seinfeld episodes I’ve seen. My wife says I can relate everything to Seinfeld and I have several friends who know exactly what I mean when I say, “the vault”. If you’re interested in the meta cognition involved in crafting a joke, rent the DVD Comedian. It chronicles Jerry Seinfeld’s return to stand up comedy and more interestingly how difficult it is to be funny or entertaining. It’s hard work to be entertaining. I think it aligns nicely with the value of crafting a compelling slide deck for your presentations. Often skipped over because its seen as decorative, it really becomes the avenue for which compelling ideas are expressed.

So spend some time on youtube watching storytellers and comedians. So is content more important than engagement? Maybe not but most of the world would say it is.