Today a Canadian hero in education died suddenly from a massive heart attack. Joe Bower as a middle school teacher from Alberta. He was 37 years old.

I almost didn’t write this since some folks had already written about Joe. But then I realized the more people know about Joe and his work, the richer his legacy. If you know Joe, followed him on twitter, read his blog or heard him speak, you likely already know what a smart, passionate thinker he was. My own interactions largely revolved around me introducing my pre-service teachers to his work as well as referencing him in any presentations I did around assessment. I use this slide to showcase those that have influenced my thinking around assessment. Some of these folks are world renowned “experts”. Joe was every bit as important as any of them. (Sadly Grant Wiggins passed away in 2015) 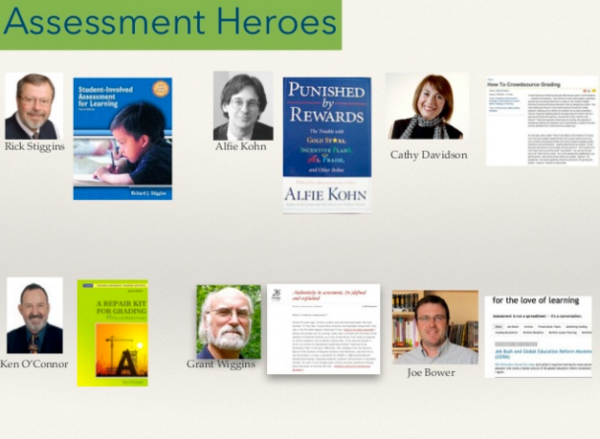 As eloquently and passionately as Joe shared, what was overwhelming evident to me is how much he cared for children. He was willing to speak the truth, even when it was harsh and unpopular with many. Not to be provocative but because he truly sought what was best for kids.

His family and friends will grieve deeply. Many of those who had peripheral relationships with will too. If you have no idea who Joe was, you would do well to start here and get your thinking challenged. Then share it wildly.