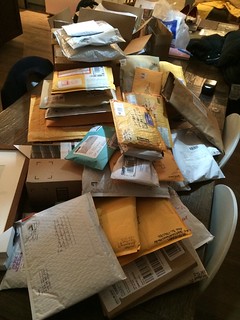 It was a big one. 50. 50 years old. To celebrate I planned a week of golf with buddies. Sandwiched in between was a couple of speaking gigs. I left 5 days before the big day. The day before I left I received a package in the may from Phillip Cummings. In it was a pair of Memphis Grizzlies socks. What a lovely gift. I left town and didn’t think much more about it other than to thank him for his thoughtfulness. A few days later, my wife began posting pictures of packages that were arriving at the house. In a strange twist, these packages were not for her. Each day more were added to the pile. By the time I arrived home 9 days after my birthday, there were 52 packages for me from people all over the world.

Looking over this pile I was completely overwhelmed at the thought that so many people would think of me. I didn’t want to open them, I saw the cumulative as an unbelievable gesture of care and community. Many of the people are people I’ve known for many years but others I’ve never met. As I opened each package I thought about that person and the connections I had. For the few, I didn’t have a connection I thought about why they would do such a thing. This is such a powerful representation of the strength of weak ties.

When other people have not yet experienced this networked life, it’s a bit odd to fathom how and why people would ever do such a thing as send a dude in Moose Jaw, SK a pair or two of socks.

I continue to spend much of my time imploring people both young and older to tap into the beauty of these personal networks. I rarely use the acronym, PLN  because, for me, the P is more often “personal” rather than strictly “professional” and the L is not always about “learning”, but for me is better substituted for “living”. While I deserve none of this, the only thing I know I have done and tried to do is to connect with people online in ways that go way beyond learning and our shared profession.

I’m still a bit in the dark around who exactly is responsible for this. I have my suspects but I really do want to thank everyone involved in this and actually everyone who brings so much joy and meaning to my life through the various spaces and places I reside online. If you’re still hung up on digital dualism, please rethink this.

Socks4Dean from shareski on Vimeo.

So once again, thank you to all of you.

The final tally was 86 pairs. A clear meat theme several sports teams and a couple of doubles. My daughter claimed every duplicate pair.  Now when I say I have to stay home and rearrange my sock drawer, I won’t be lying.

*I think I may have a sock or two mixed up. My apologies. If any more come in the mail, I’ll add them to this set.