Cross posted on The DEN blogs

The other day I was in the middle one of my regular google hangouts with my teammates and my wife happened to be home over hearing the conversation. “I hate you”, she said in jest. “All your calls include lots of laughing, lots of encouragement and a bunch of new cool things you’re doing.” Yeah, that pretty much sums it up.

Fast forward to today where I’m in Surrey, BC, a suburb of Vancouver where I’ve spent the day working in various capacities with staff and students. This morning I was able to spend an hour at Fraser Heights Secondary School where I’ve been before. Sheila Morrisette, the principal, invited me to share an hour during lunch so I had the chance to work with 25+ staff exploring the notion of creativity and how we can begin to work our creative muscle using tools like the Daily Create and PechaFlickr. Nothing earth shattering but hopefully some useful ideas for folks to add some opportunities for students to think about and do more creative things. It’s always fun to spend a few minutes with folks actually doing stuff instead of just listening to me blather on, which I can do if need be. 😉

I then drove over to Bear Creek Elementary to work in Diana Williams classroom. Diana has been a rising star on my radar who has been exploring many things including Kiva after spending some time with Bill Ferriter. Diana is creating a video about their work with Kiva and wanted me to participate. I have minor cameo and offered a few ideas with regards to green screening.

Diana’s classroom is a treat to be in. As chaotic as trying to film 9-year-olds who are wearing ninja headbands might be, she handled them beautifully. It was evident that they were engaged and invested in their learning. I don’t get to be in classrooms very often anymore but after I spent a half day in my wife’s room last week and today in Diana’s class I really want to include more opportunities to work with students. 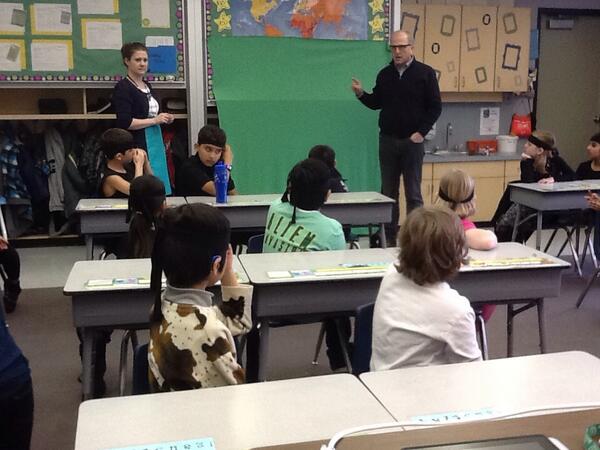 As soon as students were dismissed we heading up to the library to participate in a Smackdown. A smackdown, for those unfamiliar is simply a fast-paced way for folks to share. I casually mentioned this idea to Tia Henriksen and Diana last week and they sent out a call and over 20 people showed up. Lots of great ideas, books and  apps were shared in a brief time period. DEN STARs Kathy Cassidy and Heather Blacker chimed in along with Brad Fountain. These people continually answer the bell every time I ask and always provide great insights and ideas from their classrooms.

As I was about to head for the airport, Tia and Diana had a little surprise for me.

A little early birthday wish complete with cake and balloons. I was a little weary of taking giant balloons on the plane but also didn’t want to leave without the wonderful messages that were inside them; notes from Diana’s students and the participants of the smackdown with personalized thanks and kind wishes. I think it’s clear I do have the best job. 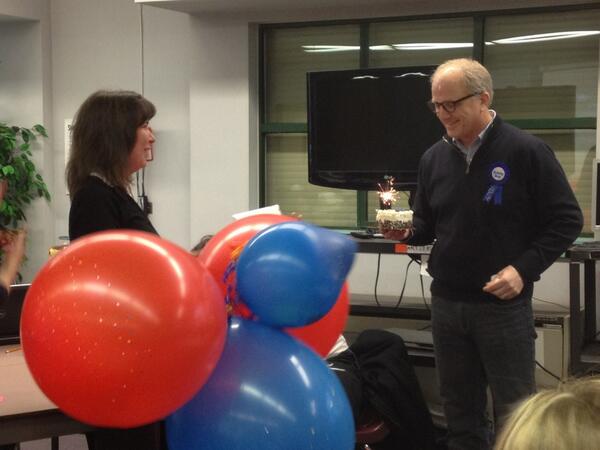 I’ve said often, I get an  inordinate amount of praise for just doing my job. From my colleagues and DEN members and the people I speak to, folks are so gracious with their thank yous. It reminds me every time as I think of my wife, Diana and all the other great teachers who do the hard work of educating kids every day and I wonder how we can begin to thank them more. My wife has a note taped to her cupboard from a grandparent this year who wrote a thank you note for putting their grandchild’s tooth in a bag after it fell out in class. That’s normal procedure for a primary teacher but the thank you wasn’t and that’s too bad. The fact my wife pinned it to her classroom cupboard is a strong reminder of what a thank you means.

It’s not written in any job description or official goal of mine but if in some small way I can spend every day saying thank you to teachers, that would be a worthy and fulfilling goal. A have this unverified belief that if we really want to improve working conditions of teachers, saying thank you might be a great way to start. I’m not suggesting it solves all our problems but not many of us can say we do this well. And yet we all know how motivating and encouraging it is when we receive thanks. This post serves as a reminder to me to return the many thanks I get back to teachers more regularly.  I do have the best job, but they have one of the most important ones.