My two favorite networks, The Golf Channel and NFL Network have been using “Top Ten” format of late to capture almost any topic within their respective sports. Obscure ones like, top ten left handed quarterbacks, Phil Mickelson’s top ten daring choices, etc. So while most of you think that’s pretty lame, I watch in fascination comparing my memories and choices with the producers.

It’s a lofty title but I wanted to look back at my personal journey into educational technology and share a few instances of “aha moments” that I think many can relate to. Not a list, (sorry Lee) in any order of significance but a chronological recollection of memories and events that have been influential in my learning with technology.

The Digital Camera:
I remember our school got a digital camera in about 1996 or 97. For whatever reason, my principal let me take it home. I don’t recall the brand, I believe it’s no longer around but remember the miracle of being able to plug it into your computer and see your images. I believe it was 640 x 480 resolution. It was the next year the Sony Mavica’s with floppy disks emerged as a great way for teachers to share the camera and print pictures. The beginning of cheap failure.

FTP:
My neighbour, who was not an educator showed me the wonders of File Transfer Protocol when he used it to send files from his house to mine. I’m thinking this was 1998 or ‘99. He installed this software on my computer and magically began to take files he had stored on something called a server and downloaded them to my machine. Size was no longer an issue when it came to sharing.

RSS
During my Masters studies, Rob Wall introduced me to RSS in late 2002. I had heard about it but couldn’t really wrap my head around it. It felt too geeky for me. Once he showed me Bloglines, I went nuts. I was able to “subscribe to people”. I still do.

The Blog:
I started my blog in 2005 with no idea what it could mean. But after years of Netscape Composer, Frontpage and Dreamweaver it was a pleasure to bypass the focus on design and just write and share. 7 years later, my blog remains one of my primary learning spaces. I’m only saddened more people don’t blog and yet I get it’s not for everyone.

Wiki
The creation wasn’t particularly interesting but the collaboration was. I stated on my blog in the summer of 2006 that I was going to be offering a digital storytelling workshop. A weak cry for help led Alan Levine and David Jakes, both of whom I pretty much learned everything about digital storytelling from, to turn my pathetic wiki into something extremely useful. In many ways, it was the start of my laziness. You can blame Alan and David for that.

Skype chat/Back Channel
It was during the 2007 NECC conference in Atlanta that was able to participate virtually via Skype. Jeff Utecht  was attending and fired up Skype during one of the session and allowed a few of us to listen and chat. It was my first back channel experience. 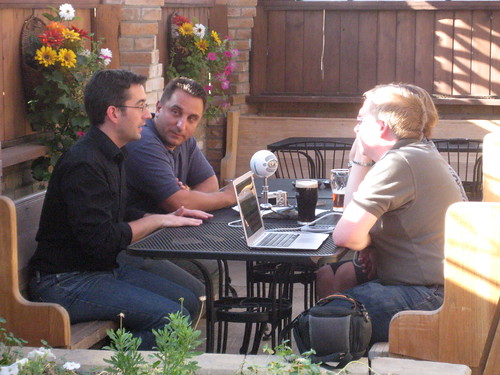 Podcasting
This blog post covers much of what I still think about podcasting and the names of people who really resonated with me. It was truly a way that I got to know people in a more personal way than reading their blogs. Blogs tend to have more of a polished, formal feel, podcasting allowed people to become more real.

Coffee with David Warlick
I had attended a few conferences but it was my boldness that led me to email David Warlick and ask if I could meet with him in 2006 at FETC.  The realization that I could have conversations with people I admired and was learning from almost daily was pretty significant. THat same conversation I got to meet Will Richardson, Wes Fryer, Tim Wilson and my current work colleague, Steve Dembo.
These people remain my teachers and I also call them friends. Much more than a PLN.

Live Streaming
Ustream was a relatively new technology in 2007. Steve Dembo, Will Richardson and David Jakes live streamed from a bar in Chicago. The live streaming part was interesting but so was the fact that they were talking about baseball and not education specifically. It made me begin to think more deeply about silliness.

There’s certainly many more moments I could share and it’s not like nothing has happened in the past 5 years but sometimes it’s good to consider and mark those events that stirred you in some way. For me, it’s interesting to see a clear pattern of connectivism amongst most of these events. I suppose if I was in a different frame of mind, things like my first laptop might come to mind.  I’d encourage you to create your own list or add your ideas here.

I did ask a few folks on twitter about their great moment in edtech history.