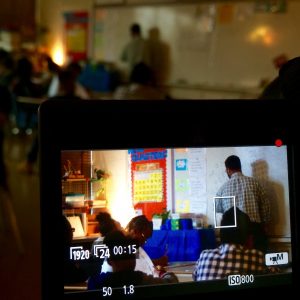 This was another incredibly satisfying year professionally. My work with Discovery Education continues to evolve and my role as Community Engagement Manager is one where I get to work with so many wonderful people. I spoke to thousands of people in keynotes and workshops. I collaborated with colleagues on many projects and contributed to lots of content online. However this year my best work came in the form of a passion around storytelling.

A few years ago I saw a great series of videos produced for Prudential Insurance called Day One Stories. These were short videos featuring people on their first day of retirement. While that may or may not sound very interesting, they were shot beautifully and told simple but compelling stories.

I immediately considered both how a similar concept could be used within the Discovery Education Community. Having dabbled with video over the years, I relished the opportunity to create something based on these stories. The DEN (Discovery Education Network) began in 2005 so this was our tenth year. We celebrated in various ways and I was given the opportunity to celebrate by creating my own version of the Day One Stories.

Ben Grey, who helped create 59 in 59 in his district, spent time with me sharing his expertise and insights as I set out to create the DEN in TEN stories. Over the next few months, I shot and edited 8 videos featuring 9 community members. We showcased educators from Canada, the United States and the United Kingdom.  From elementary and high school teachers, principals and vice-principals and district leaders and coaches and even retired educators, the Discovery Education Community is diverse and full of great stories.

For example, here’s RJ Stangerlin. She’s a founding member of the community, retired educator and cancer survivor. I was privileged to share her story.

DEN in TEN: RJ Stangerlin from shareski on Vimeo.

You can view all the stories here.

While I say it was my best work, I’m fully aware of the flaws and areas that need improving. I’m not a professional videographer but am passionate about storytelling. I’m grateful for people like Ben who are so willing to share and offer great feedback.

For those interested in the technical side or process here it is.

I began each project with a Skype call to do a mock interview. As you might be able to tell, the videos follow a pretty basic plot line. Your role as an educator, your personal life and interests, your connection to the community. A 30-minute pre-interview gave me a better idea of what I would like to capture. I arranged to travel to the subject’s location and tried to capture the audio first. Using a snowball mic and a quiet space, we mostly just talked. I wanted to capture as natural a conversation as possible. Usually, I ended up with anywhere from 15-30 minutes of audio. Then we went to film. Knowing that none of the audio from the video would be used, simplified the process. I used a Canon Rebel ti3 DSLR with a 50mm lens. I tried to only use footage that was shot from a single position. No panning or zooming. I didn’t always keep this rule but tried. The challenge came in shooting in classrooms. I tried to use a variety of shots so that classrooms didn’t become generic. I captured about an hour of total footage.

Editing always began with the audio track. Using Audacity, I essentially tried to find snippets that might be useful. Rarely were these longer than a minute. I ended up with 6-8 minutes of audio and then tried to edit it down to 3-5 minutes. This was the most difficult part of the editing but the format I used meant that after this was done, the rest would be much easier. I used iMovie to do the rest of the editing. Having access to the Discovery Music library I looked for minimalist soundtracks that did nothing more than kept the story moving at the appropriate pace.

I could talk for hours on the nuances of this kind of storytelling, not as an expert but as someone who appreciates and is trying to learn this craft. I hope to continue telling these stories and more importantly, hope the help you understand better the Discovery Education Community.