Whenever the mention of television comes up among educators, there are invariably those who denounce it as a waste of time. You can sound very educated simply by telling others you don’t watch TV.  I call them TV snobs.

There’s a number of good discussions happening about this topic and all seem quite passionate. While I respect these opinions, I disagree. I’ve chimed in a bit but feel I need to make my own statement. It’s not the first time.

I’m trying to examine what folks have against TV. Here’s what I think the arguments are and why I dispute them:

I don’t believe you have to watch tv or that if you don’t you’re missing out.  You don’t need tv to be a well educated person.  What television does best is tell good stories (movies, sit-coms, dramas) , showcase live events (news and sports) and inform (discovery channel, how to shows, etc….)  You can get all these things in other formats but television provides a good format for this type of media.

I don’t do video games. Most of the games kids play in my opinion are too violent and are highly intellectual. But I certainly won’t be wearing the “I don’t play video games” badge.

The converge of media is not going to stop. Eventually we may not distinguish whether we are watching TV, viewing a webpage, playing a game or reading a book or the news. It’s already happening. It’s just information and entertainment in a various formats. My father-in-law downloads 12 newspapers everyday and takes them to the local coffee shop where he reads them off his laptop while the seniors spend $1.25 everyday to read one hard copy and get their hands full of ink.  I could argue that those who dirty their hands on ink filled newspapers are making a bad choice, hurting the environment and themselves.

Sorry but to me it’s no different.  It’s about format and choice. I wonder why we are so hung up on format? I like TV.

Image: Tesla on the Telly 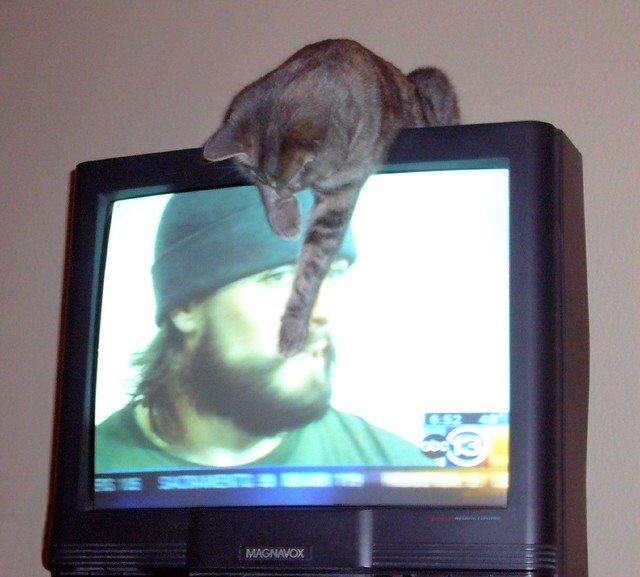