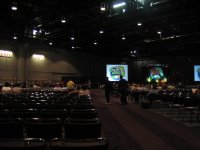 I just wanted to make a few comments on my first impressions of FETC. I had a quick walk through the exhibits. Obviously the sheer volume of vendors provides quite an experience. Yet so many of them focused on the administration of education. I suppose that’s where much of the big dollars is to be made. Certainly coming from a school division of 7,000 students can’t compare to some of the school districts in the US of hundreds of thousands. These vendors are interested in making big deals with big districts. There’s nothing wrong with this but the majority of these do not have a direct focus on information literacy or the great tools of the read/write web. Is that because many of these tools are free?

Rudolph Crew spoke about some very important ideas including civic literacy and personal literacy. Civic literacy, as he describes, refers to the way students respond to the world. In many cases our students do not have the social understandings and appreciation to cope in the world. His explanation went deeper than this but basically he argued that while schools may be improving in some test scores and achievement, many students are graduating without the necessary interpersonal skills and awareness of civic issues to be the successful citizens we’d like to have. Although he didn’t explicitly state it, the relationship between this and information literacy is quite evident. Even though we know students are smart and have many skills and knowledge, they often struggle with people skills. Just as students bring many technological skills and understandings, they often don’t understand the implications or have the analytical skills to manage information.

I like what he had to say. Without having a indepth understanding of American education, I still wonder how he justifies the continued emphasis on testing and the less than adequate testing measures. But I’ll take away his ideas about not going along for the ride and being proactive in our quest to make the best use of technology and preparing students for the 21st century.